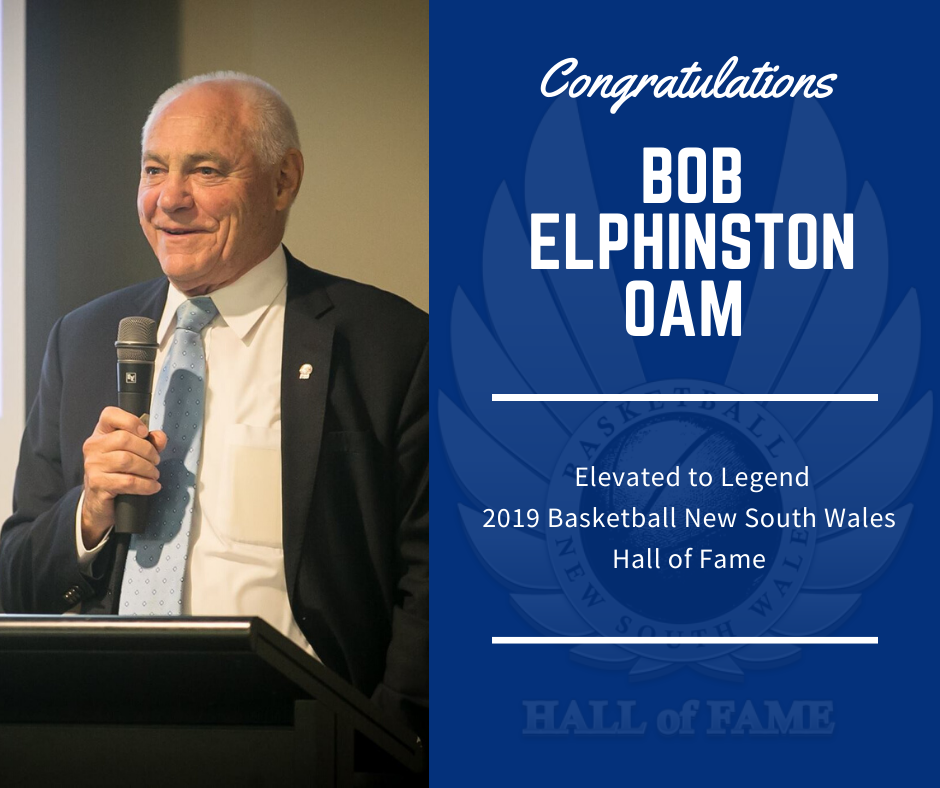 Bob Elphinston OAM, a pioneer in the development of Australian basketball across all levels and one of the most influential men in world basketball is the latest to be elevated to Legend in the 2019 Basketball NSW Hall of Fame.

Bob Elphinston OAM was first inducted into the inaugural Basketball NSW Hall of Fame back in 2011, and since then has not stopped campaigning for the development of the game across the globe.

Bob has well and truly been around the game of basketball for decades, and it is his ability to manage and direct that has seen him be appointed to numerous high-standing and influential roles with the most prestigious being his Presidency of FIBA from 2006-2010.

In his early days in his basketball career, he first started as a NSW State team Assistant Coach than later on as head coach of a handful of junior and senior NSW teams in the 1960’s and 1970’s, winning two Australian junior Championships and one Open Women’s Championship. He coached the NSW Men on a tour to the USA in 1973 and then the NSW Women’s team in 1975.

Bob’s love and passion for basketball was paramount, demonstrated by his heavy involvement  in the formative years of the Bankstown Association (President for 17 years & Life Member) and the building of the association’s seven court basketball stadium, the second largest in Australia at the time.

It was in 1982 that Bob took the next step in his basketball career when he managed the Australian Men’s Team at the 1982 World Championships and the 1984 Olympic Games.

Representing the Bankstown Bruins, Bob was a Founding Director of the National Basketball League in 1979 and has continued to support the NBL till this day.

His knowledge and management skills also helped establish the renowned NSW State Sports Centre at Homebush in 1984 with the facility hosting some of the biggest sporting events in Australia including the Sydney 2000 Olympic and Paralympic Games.

In 1991 Bob was appointed General Manager of the Sydney Olympics 2000 Bid Company. After helping secure the 2000 Olympic Games Bob was in charge of the smooth running of all aspects of the 28 sports at the 2000 Games. With 11,100 athletes from 199 nations, more than 8 million spectators and a worldwide television audience of 3.9 billion, he personally rallied the cause of Sydney 2000, with the games being labeled by IOC president Juan Antonio Samaranch as “the best Games ever.”

Bob has done it all for the sport in Australia and he was rewarded for his services when he became a member of the Basketball Australia Hall of Fame, Life Member of Basketball NSW and was the founding President of the Australian Basketball Coaches Association.

He was also Awarded an OAM in 2002 for service to sport through the Sydney Olympic 2000 Bid Company and the Sydney Organising Committee for the Olympic Games. And, in 2006, Bob was inducted into the Australian Sports Hall of Fame.

With all that he has done for basketball in this state, he was afforded the opportunity to lead from the front and the game hasn’t looked back since. Having served as a volunteer for more than 50 years in the sport, Bob says he is indebted to his wife, Maureen (former Australian Opal) and son Brett (former captain NSW U18 squad) and daughter Nicole for their incredible support to him over his remarkable journey.