I AM A GIRL LEADERSHIP SCHOLARSHIP AMBASSADOR ANNOUNCEMENT | CARRIE GRAF 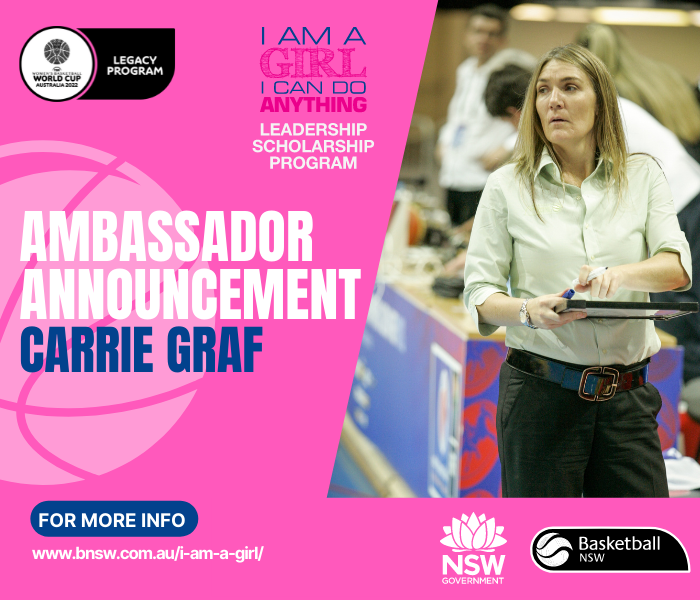 The I AM A GIRL Leadership Scholarship Program is an initiative under the NSW Legacy Program for the FIBA Women’s Basketball World Cup 2022, proudly funded by the NSW Government.

A natural leader, Carrie Graf began her professional basketball career as a highly sought after athlete in the WNBL at age 15, even winning Rookie of the Year in her first year in the league. She continued to play in the WNBL until 1989, when she transitioned into the realm of coaching and led the Sydney Flames to their first ever Championship in 1993.

Once she made her mark in the WNBL as a Head Coach, Graf became the first female Australian Coach in the Women’s National Basketball Association (WNBA) with the Phoenix Mercury where she held the role of Assistant Coach in 1998, 1999, 2001 and 2003 before earning the head coaching role from 2004-05.

On the international scene, Graf represented the Australian Opals in 212 games, 156 as an Assistant Coach and 56 as Head Coach. As an Assistant Coach she was a part of history when the Opals broke through for their first ever Olympic medal, a bronze in 1996 at the Atlanta Games. As Head Coach, she went on to be a major factor in one of the Opals’ most successful periods as they won another bronze medal at the 1998 World Championships and a silver medal at the 2000 Sydney Summer Olympics.

She also was appointed a Member of the Order of Australia for her significant service to the basketball community, particularly as a coach, mentor and athlete in 2010 and was inducted into the Australian Basketball of Fame in 2017.

In her role as Ambassador, Graf will play a crucial part in the future of the program by having a real and engaging involvement across all of our supported participants and future activities within the IAAG Leadership Scholarship Program.

Graf will be uniting with Liz Mills, who was announced as the first Ambassador of the program earlier this month, as both their professional insights will be invaluable to the success of the scholarship holders and the NSW Legacy Program.

Speaking of the announcement, BNSW Sports Scientist, Martha Lourey-Bird, said  “We’re extremely proud to have Carrie join our ranks and represent our I am A Girl Leadership Scholarship Program. It is difficult to imagine two people that better fit the embodiment of the IAAG values other than both Liz Mills and now Carrie Graf as our first two ambassadors.”

“It’s a given that Carrie will bring great awareness to our mission of empowering our scholarship recipients with her incredible experience at the elite level as well as her love of community sport. That is what a real ambassadorship is all about, wanting to help others be the best they can in the area that they wish to succeed in,” said Lourey-Bird.

“We can’t wait to continue to roll out the next phase of the program with our trailblazing Ambassadors at the helm.”

Speaking on the importance of what the IAAG Leadership Scholarship Program can achieve, Graf shared her passion for coaching and how the culture has changed over the years for females in those leadership roles.

“Particularly now with the spotlight on women’s sport, it’s now a more exciting time to be engaged and to really carve out a profession,” said Graf during the first IAAG online Q & A session.

“25 years ago people would have laughed if you said ‘I am going to be a professional basketball coach’ as a young female, it would be unheard of but it is even more possible now with the opportunities and the number of leagues around the world. Especially including the growth of the WNBL and off the back of next year’s Women’s World Cup.”

Basketball NSW will continue to announce further IAAG Leadership Scholarship Program Ambassadors over the course of the next 12 months, from all areas within the game.

The IAAG Leadership Scholarship Program is an initiative under the NSW Legacy Program for the FIBA Women’s Basketball World Cup 2022, proudly funded by the NSW Government and aligned to its Her Sport Her Way Strategy.

A number of activations will be rolled out each year leading up to the FIBA Women’s World Basketball Cup 2022.

Click HERE to be redirected to the I AM A GIRL webpage.