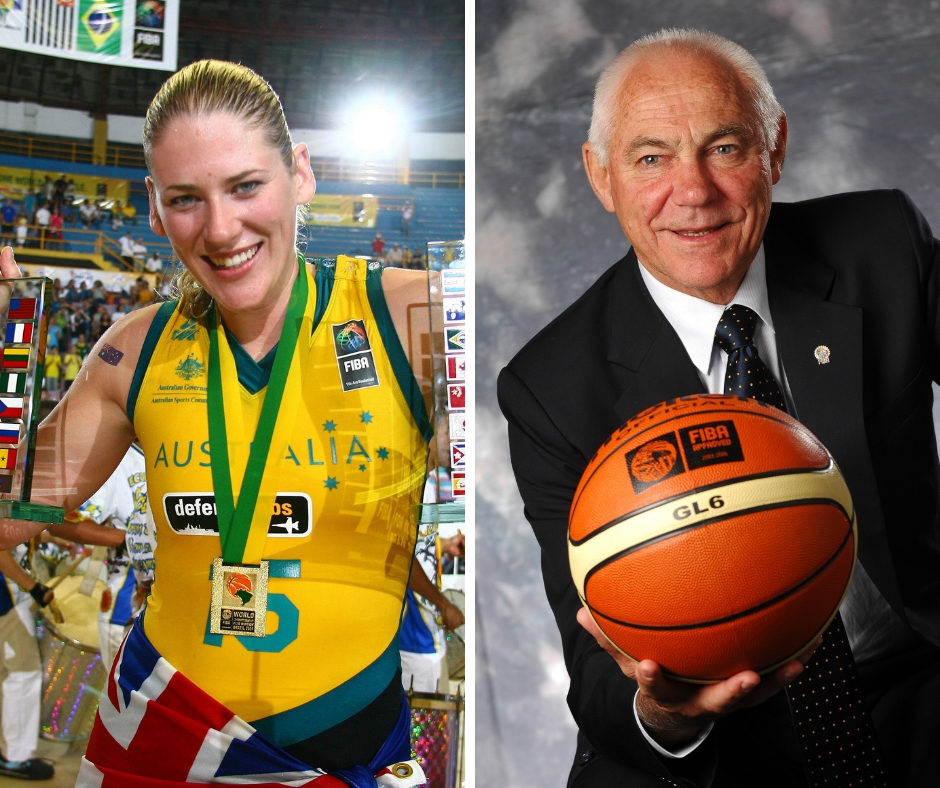 Australia’s most decorated basketballer, Lauren Jackson AO OLY will be enshrined as a Legend in the Basketball NSW Hall of Fame to held on Saturday 2nd of November.

An incredible resumé at home, abroad and internationally. Jackson’s accolades include six WNBL Championships, two WNBA Championships and 3 EuroLeague Championships. She was named WNBL MVP and Grand Final MVP four times each, was a three-time MVP in the WNBA and a seven-time All-WNBA First Team nominee while clocking up 16 All-Star nominations across the WNBL, WNBA and Europe.

As a member of the Opals, Jackson was just as prolific. She claimed an Olympic bronze medal (2012), three Olympic silver medals (2000, 2004, 2008), two World Championship bronze medals (1998, 2002), a World Championship gold (2006) and a Commonwealth Games gold (2006) across 220 games for Australia while she retired as the all-time leading points scorer in Olympic women’s basketball history.

“I’m incredibly honoured and for it to be with Basketball NSW, I’m so proud to be a regional NSW girl!”

“I’m also so happy that as a female basketballer I’m able to represent all the other young girls and women before me and the next generation to come, and to continue to pave the way for these kids to do remarkable things in this beautiful sport!!!”

“I’m looking forward to celebrating the night with the Class of 2019 being inducted into the Basketball NSW Hall of Fame.” said Jackson

Joining Jackson to be elevated to the status of Legend in the Basketball NSW Hall of Fame will be Bob Elphinston OAM, a pioneer in the development of Australian basketball across all levels and is one of the most influential men in world basketball through his various roles, the most prestigious being his Presidency of FIBA from 2006 – 2010.

He was the manager of the national men’s team at 38 events, including the 1982 World Championship in Colombia and the 1984 Olympic Games in Los Angeles.

Elphinston also played a pivotal role in establishing the NSW State Sports Centre as well as in garnering the successful bid for the 2000 Olympic Games.

“Joining three Legends, Al Ramsay MBE OAM, Dr John Raschke OAM and Dr Adrian Hurley OAM who have been great mentors to me in my basketball journey, makes me very proud and humble.”

“To be honoured along with Lauren Jackson AO OLY, who I regard as the best female player on the globe in her era, makes the BNSW Hall of Fame Ceremony very special.” said Elphinston

Davies’ efforts were noticed by national selectors with his inclusion in the Australian Men’s squad in 1968.

Gerry Hewson OAM a member of the Australian men’s national wheelchair basketball team, competing at four Paralympic Games from 1988 to 2000.

He won a gold medal as a member of the team at the 1996 Summer Paralympics in Atlanta, for which he received a Medal of the Order of Australia.

He competed in the National Wheelchair Basketball League (NWBL) in 2001, the same year he was named as the Low Point MVP for the league. In 1999, 2000 and 2001, he was also named as part of the league’s All-Star Five.

Carl Rodwell was drafted by the Atlanta Hawks in the 20th round of the 1969 NBA draft, with the 217th pick overall.  He went to the Tokyo 1964 Olympic Games and averaged 6.3 points per game as Australia finished a respectable ninth.

The six-foot-eight centre was also on Australia’s Mexico City team in 1968, though the team was unsuccessful in qualifying, Rodwell was the team’s second option behind Lindsay Gaze.

Rodwell played college basketball at UC Riverside for four seasons, where he finished his career as the school’s fourth-highest all-time scorer and rebounder. He was inducted into the UC Riverside Hall of Fame in 1991.

Damian Keogh an illustrious fifteen-year international basketball career saw Damian wear the green and gold on more than 200 occasions including three Olympic campaigns – Los Angeles in 1984, Seoul in 1988 and Barcelona in 1992. He also competed at three World Championships before retiring from Australian representation in 1994.

Keogh joined the Sydney Kings in their formative season in 1988. Keogh captained the Kings from 1989 until retiring at the end of the 1995 season, leading them to the semi-finals in 1989 and 1992. He leads the King’s all-time records in points and assists, was named the Most Valuable Player in 1990 and is one of a handful of players to have played more than 400 NBL games. A Former Board Member of Basketball NSW and Basketball Australia.

Shelley Gorman is known to many simply as ‘Gorms’, was one of the toughest and fittest players ever to wear an Australian uniform. Over 15 years and 306 games, Gorman achieved some significant milestones.

Selected to play at the 1988 Olympics at the age of eighteen, the following year Gorman was the Co-Captain of Australian basketball’s first medal-winning team, the Gems of 1989 who claimed a bronze medal at the World Championships. After her Olympic debut in 1988, Shelley won bronze and silver medals at the 1996 and 2000 Olympic teams.

Contributors Barrie Meadows, Andrew Lazaris and Eve Craddock will be inducted along with those five players.

Barrie Meadows, Barry has dedicated his life to the game of basketball, from the early teaching days in the sixties through to the current day. Now in his eightieth year, Barrie is still active in the Jannali Basketball Club, which he founded in 1972 and coaching 2-3 teams a week at the grassroots level in the Sutherland District Basketball Association domestic competitions.

Meadows has been instrumental in the development of basketball in schools, he has held numerous Head Coach positions in both the boys and girls programs in both the NSW Combined High Schools and NSW All Schools.

Andrew Lazaris OAM, Andrew has been involved in the sport of basketball for over 45 years.  He commenced playing basketball for Woolloomooloo Playground where the first-ever basketball competitions in NSW commenced.

Lazaris was heavily involved financially in supporting the newly formed Sydney Supersonics (now the Kings) so that the CSBA could have a team in the National Basketball League.

Eve Craddock, Eve began her basketball career in Shoalhaven where she became a Board member in 1974, was elected President of the Association in 1986 & 1985 and was a delegate to the Barrengarry Conference, the only conference still in operation today.

Craddock also held a State badge in refereeing and was a long-time member of various technical committees at Australian Championships.

The only coach to be inducted into the 2019 Class, Rob Beveridge, Rob was the Head Coach of the NSW Institute of Sport from 1997 through to 2007, he was the Head Coach for the NSW U20 Men on 8 occasions, winning 4 Gold and 4 Silver medals.

Beveridge’s greatest achievement in coaching was as Head Coach of the Australian Junior Men’s Team which won the 2003 World Junior Championship in Thessaloniki, Greece, setting world records with the highest ever score and winning margin in a Gold Medal game in International Basketball.  In addition, Australia was the only team that handed the USA its only loss for the tournament with a comprehensive 21-point win in the quarter-finals.

After winning the World Junior Championship, Beveridge was appointed as an Assistant Coach with the Australian Senior Men’s Basketball Team (Boomers) for the 2004 Olympic Games in Athens, where they won a Gold medal at the Commonwealth Games in Melbourne in 2006 and coached at the World Championship in Japan, 2006.  In addition, he was Assistant Coach for Wheelchair Basketball during the Sydney 2000 Paralympic Games where Australia won a silver medal.

Steve Bignell, Highly regarded former referee Steve Bignell freely admits he wasn’t the most gifted athlete to run the boards during his decorated 28-year NBL career.  Bignell is one of just six referees in NBL history to surpass the incredible 600-game mark – having racked up 606 in total – and refereed a host of big games during his career.

Lauretta Claus, Lauretta will also be known for the tireless efforts in the area of developing statisticians, her love for statistics started way back at Bankstown when the Bruins participated in the Eastern Conference League and the NBL.

Claus was appointed Chairperson of the Australian Basketball Statistics Committee back in 1992, she is the Statistics Advisor for the NBL a position she has held since 1998 and the WNBL since 2002, Lauretta still holds all these positions today.

She has overseen many international events as the Statistics Coordinator, including FIBA Women’s World Cup in 1994, Wheelchair Basketball World Cup in 1988, Sydney 2000 Olympic and Paralympic Games, Goodwill Games in 2004, Commonwealth Games in 2006 & 2018.