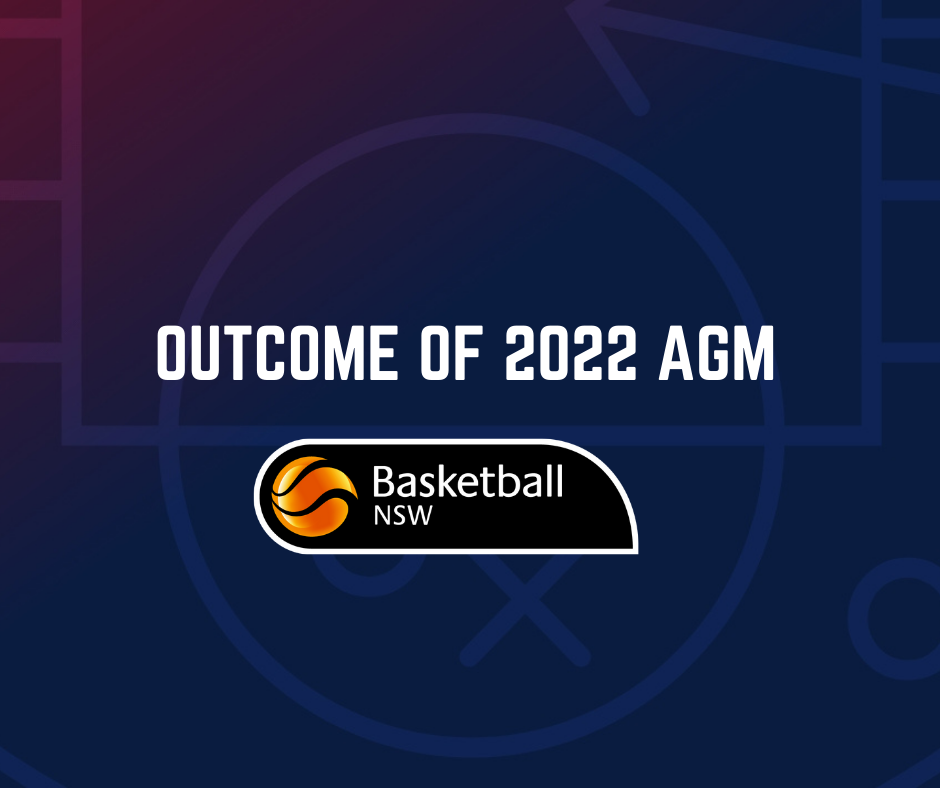 Basketball NSW would like to share with our members some key points from our 2022 Annual General Meeting that was held on the 21st May.

BNSW would like to congratulate our two re-elected Board Members with Lauretta Claus and Chair Jennifer Dean. Steve Lennon was also re-appointed as a Director.

Life Membership is restricted to those who have contributed to the control, promotion, integration, or fostering of partnership and development of basketball by their participation in the activities of the New South Wales Basketball Association or in the activities of the Company for a total period of 15 years and who are, with the approval of the Board, nominated by a member for election at an annual general meeting of the company.

Nancy Haslop has been playing basketball since the mid-late 1960s, and she has represented Lithgow, Macquarie University, and Ryde in NSW events for over two decades. Her greatest contribution to our sport, however, came from her passion for coaching, which she has done since the mid-1970s and most recently was coaching in the Western Junior League.

She is one of several individuals who have paved the road for country basketball and basketball in western NSW, not only for coaches but for women in general.

Nancy has received numerous honours for her contributions to sport and basketball including:

Robert (Bob) Sim has contributed to Basketball NSW over the past 52 years through the development of association frameworks, coaching, player development and innovative thinking.

Bob became involved with local basketball through the Merrylands RSL Youth Club teams and Parramatta  Basketball Association (PBA) in the late 1960’s. From 1974 to 1981 Bob held the position of Vice President of PBA & created, promoted, administered, supervised and refereed the first ever official PBA junior women’s competitions. During this time Bob was also the President of Parramatta Ports Basketball Club which developed into the largest club participating in the PBA.  He was actively involved in junior and senior coach development at the PBA during this period, as well as player talent identification and development.

In the latter part of the 1970’s Bob spent much of his time working voluntarily at the site of a three bay warehouse with an amenities block at Wyatt Park Lidcombe that the PBA Committee converted into a 3 court indoor basketball stadium which become known as Auburn Basketball  Centre. During this period Bob was involved in preparing and submitting grant applications to NSW Department of Sport and Recreation.

During his many years on the sidelines as a coach, he was apart of various club, association and state team success. One major achievement was in 1999 Bob was appointed Head Coach of the BNSW Under 20 Women representative team competing in the Australian National Championships, which they won. This was the first NSW U/20 Women’s team to ever win a National  Championship. He also went on to work for Basketball NSW in the area of Manager, Player/Coach Education and during his 14 years of employment progressed to various other positions, including  Manager, Coaching and State Teams; Senior Manager, Coaching and Commercial; General Manager, Business and  Strategic (including Marketing and Communications).

He has continued to showcase his presence and performance at all levels in our sports infrastructure from club to association and to the state body. Bob has also featured on numerous Association Boards and Government committees as a pivotal member of each group and their strategic goals. Undoubtedly, the presence of an office complex that is owned by the sport in NSW is testimony to Bob’s careful planning and innovative thinking.

Bob has many accolades to his name for his contributions to the infrastructure of sport and basketball in NSW including:

Bob has won many awards for their hard work and its associated achievements that are testimony to his longevity in the sport.

Join us as we congratulate our two newest Life Members.

CLICK HERE to be directed to the 2021 Annual Report