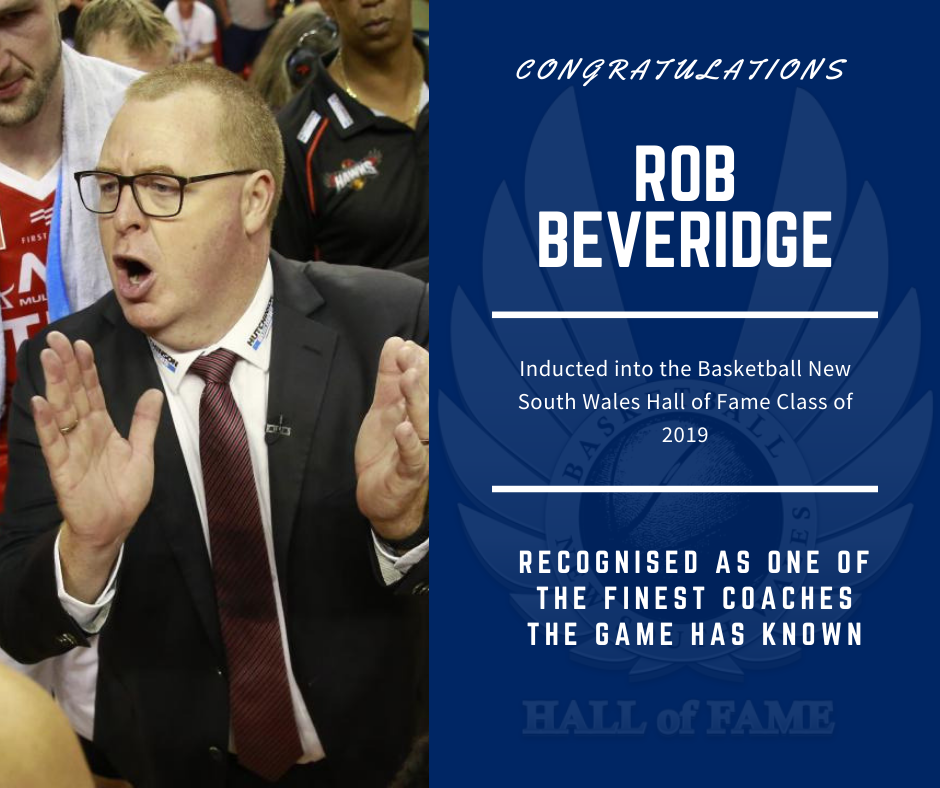 The only coach to be inducted in the 2019 Basketball NSW Hall of Fame Class, Rob Beveridge has been a stand out figure in Australian basketball for decades.

Rob began his first-class coaching duties back in 1997, when he was appointed the Head Coach of the NSW Institute of Sport and continued in this position until 2007. He was also the Head Coach for the NSW U20 Men on eight occasions, winning four Gold and four Silver medals at the Australian Junior Championships during this period.

During this time Rob also spent eight years with the Australian national team program from 1999 until 2006 which included a term as an assistant coach at the Sydney 2000 Paralympic Games in which Australia won silver.

One of Rob’s greatest head coaching achievements was when he was selected to lead the U20’s Australian Men’s squad in 2003 at the U20 World Championships in Greece, in which they won gold by a record score and winning margin for a Gold Medal game in International Basketball. In addition, Australia was the only team that handed the USA its only loss for the tournament with a comprehensive 21-point win in the quarter-finals.

After winning the World Junior Championship, Rob was appointed as an Assistant Coach of the Australian Boomers during their 2004 Olympic Games campaign in Athens, followed by their Gold Medal win at the 2006 Commonwealth Games on home soil in Melbourne.

Rob began coaching in the National Basketball League (NBL) in 2007 with the West Sydney Razorbacks followed by the Perth Wildcats in 2009. While taking over the reigns in Perth, Rob successfully lead the Wildcats to three grand finals during his four year stint and won the Championship in 2010.

Rob then tried his hand coaching overseas, spending one season with the YAO Ming (CHN) (owned Shanghai Sharks), before returning to the NBL in 2015 with the Illawarra Hawks. When back in the NBL, Rob once again guided his team to a semi final series in 2016 and were runners up in 2017.

In 2018, Rob was named Head Coach of the Scotland National team for the Gold Coast 2018 Commonwealth Games finishing in 4 th place and in 2019 led the Australian Emerging Boomers to a Bronze Medal at the World University Games.

The man affectionately known as ‘Bevo’, is a familiar and well loved face around the courts who has coached over 300 NBL games and is an exemplary member of the 2019 Hall of Fame Class.