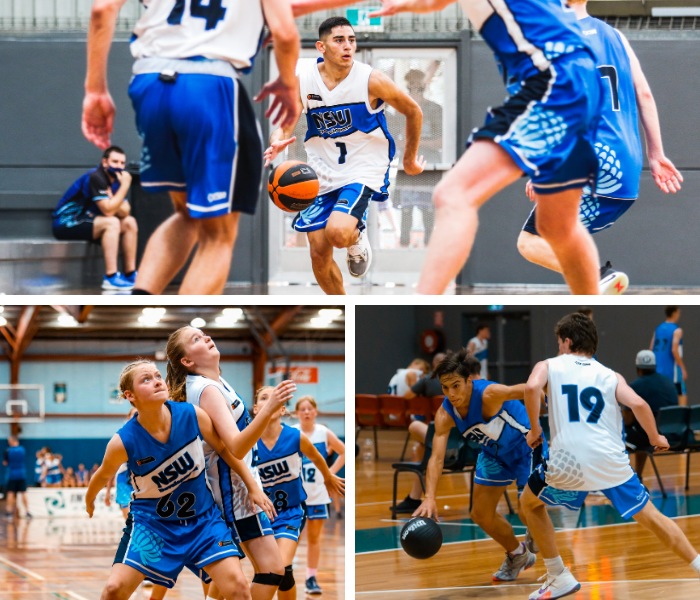 Following a huge start to 2021, Basketball NSW is pleased to report on the success of the various January High Performance Development Tournaments that included Country & Metro athletes over the past few weeks.

Traditionally, the month of January has always played a pivotal role in BNSW’s Development and High-Performance Pathways. BNSW was keen to continue to offer opportunities for athletes, coaches and referees (officials) by implementing the following alternative options after numerous cancellations with interstate events due to Covid-19.

The first event of the year saw our U16 & U18 Metro & Country athletes battle it out in Hoopfest which was a three day round-robin style tournament in Penrith. The event included 180 athletes and 33 coaches which all benefited from learning opportunities from our potential head state coaches.

The following event was our U14 Sandslam tournament hosted at the Bankstown Basketball Stadium which saw over 180 Metro & Country Athletes participate in what was their first time competing in a NSW High-Performance development event. With over 25 dedicated coaches from across the state, with six metro teams and six country teams battling it out over the three days, everyone enjoyed their first taste of basketball for the year.

With the cancellation of the Country Development Tour (CDT) that normally takes place in Newcastle each January, the creation of the Shootout was born. With the concept of building more 3×3 based skill development in junior athletes, the first stage of the tournament was a round robin 3×3 tournament and then coaches formulated a draft to pick their teams for the second half of the event which was a 5×5 based competition. A total of 126 athletes and 29 coaches attended the Shootout.

BNSW also kicked off the Developing Athlete Program (DAP) with an Induction Camp being held at Minto during January which saw 182 metro athletes attend a day of training under the guidance of BNSW High Performance and Network Coaches. DAP is the first tier of Basketball NSW’s High Performance Program which focuses on the identification, development and support of athletes aged 13-17yrs. DAP also serves as a platform to develop and educate aspiring elite coaches, through mentoring, training, education and support.

The back end of 2020 also saw two successful State Performance Program (SPP) Induction Camps at Barker College. Due to the everchanging Covid-19 restrictions, this year’s camps looked a little different than previous years with boys & girls spread across two separate weekends and it not being the normal live-in style of camp.

Both camps offered up an unique opportunity for our athletes to experience an intensive training environment that assists in their development and helps prepare them to potentially represent NSW at an Australian Junior Championship. During the weekend camps, BNSW was also joined by Dr Stephen Bird & Momentum Physiotherapy to aid in testing and recovery which saw a huge increase in professionalism shown by all athletes and coaches.

BNSW General Manager of Coaching and Development Brett Coxsedge was excited to see everyone back on court after numerous months on the sideline.

“This year we have had to be very innovative with ideas to keep development going for our athletes. Due to Covid-19, we were not able to go to tournaments that we normally attend in Melbourne and Albury so we had to think outside the box and we put together three tournaments for the athletes, coaches and officials so that they could get back on court to recommence their growth and learning,” said Coxsedge.

“We had a great level of basketball played across all our events in a safe environment, and the main thing is that every kid was on court smiling with their teammates and just having that level of competition that they have missed out on in the last six to twelve months due to Covid.

“Hopefully this is a good start to 2021 and we get an opportunity again to get these kids back on court at other events throughout the year.”

Basketball New South Wales would like to thank all stadium staff members for the continued cooperation in running our DAP and SPP Camps, Hoopfest, Sandslam & Shootout and for assisting us in our Covid-19 Safety Plans. We would also like to extend our gratitude to all our coaches and officials that were on hand – all our programs wouldn’t have been possible without your support and hard work. Also, a huge round of applause to Momentum Physiotherapy and Health Services, for looking after the athletes and keeping them on court throughout our events.

Finally, a special mention to all our parents who supported the vision we had to get our athletes on the court after months of restrictions. We are positive all the kids had a great time making new friends and reconnecting with past teammates, we hope to build on these events to keep growing basketball in NSW.