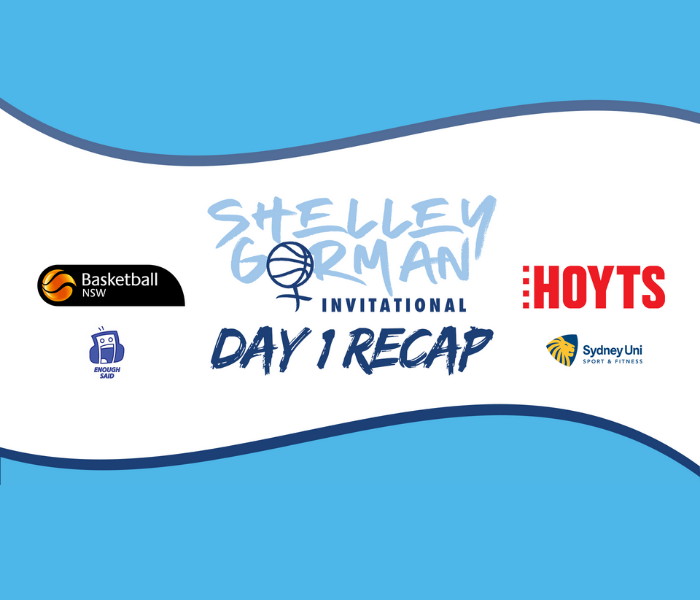 Day 1 of The Shelley Gorman Invitational saw five of the six teams take to the court in three contests that showcased both the present and the future of the women’s game in New South Wales. The Aces team, led by Lauren Nicholson and an elite supporting cast, have already secured their pathway through to the semi-finals with a pair of victories, and now have the luxury of watching on to scout their future opponents. Meanwhile, the remaining teams will have to bring their best today if they are to secure their own semi-final berth.

Remember you can catch all the games live and exclusive HERE

The opening game of the competition saw the young NSW U20 White team hang with the heavily favoured Aces in the early stages before the class and experience of the Aces’ stacked lineup shone through. The game was won in the middle two quarters of the game as the Aces consolidated their advantage, utilising Sutherland post Courtney West against the undersized U20 White team. A blistering opening to the fourth quarter from a U20 White side gaining in confidence throughout the game trimmed the margin slightly, but the Aces remained in complete control, rolling to the 24-point win. West would finish as the game’s leading scorer with 18 points, whilst Lauren Nicholson added 16 and Jasmine Forcadilla chipped in an even 10. Sarah Cooper improved markedly as the game progressed, finishing with 12 points whilst Bronte Corke added 11.

Following the game, Aces coach Shelley Bates was impressed with the way her team committed to playing a fast-paced brand of basketball, which was anchored by the mobility of post player Courtney West.

“I really liked (the style of game),” Bates explained. “Good group, they’re playing fast, up-tempo sort of style of basketball, and free, and it was fun to watch. It was good.

“(Courtney) just runs rim to rim so hard, so she makes it easy. It’s simple basketball when it looks like that.”

Bates was also impressed by the play of her team’s young opponents in a game that saw the Aces own the physical matchups across the court.

“I think they’re a good team, they’ve got a lot of different talents. Obviously, they’re small, they’ve got the one big in Coops (Sarah Cooper), and soon as they’re taking her out, we had some mismatches that we can exploit.

“So, they’ve got some great players, I think they’ve got good futures, but for them matching up against our size was a challenge for them.”

NSW U20 White coach Renae Garlepp was equally impressed with her side, who refused to back down from the contest.

“I liked how our team didn’t take a back step, we took it to them, and everyone kind of played pretty confident. Everything that we said, they adjusted, and first time playing together, it was pretty good.”

NSW U20 Blue came into this tournament as the more experienced of the two NSW U20 teams, but it was the class and experience of the Fever shining through in a similar vein to the Aces in the earlier game. A highly intriguing battle in the paint played out between Lara McSpadden and fellow Newcastle representative Amelia Raidaveta throughout the contest, and whilst the Townsville Fire player won the majority of the rounds, Raidaveta put up an outstanding fight and managed some positive moments of her own. The addition of Kim Hodge to the lineup also bolstered the NSW U20 Blue side’s frontcourt, but in the end a Fever side led by 13 points from Shyla Heal and 11 from Renae Garlepp alongside 19 from McSpadden just had too much class on the day. Hodge would finish with 12 points to lead the young side, with Kate Kingham adding 10.

Fever coach Chloe Mullaney spoke after the game about how her team jelled throughout the contest, and how the presence of Lara McSpadden can be used as a focal point for her side’s offence.

“Lara’s head and shoulders taller than everyone and a big offensive threat and defensive threat. So, I think if we can focus on getting her the ball as much as we can, or even if it goes in and there’s inside-outside game, I think good things will come out of it.”

First-time NSW U20s Blue head coach Rachel Higgisson provided some interesting insight into the mindset of a team that is slightly unsure as to whether they’ll even have the chance to play in the very tournament that they are currently preparing for.

“I think our girls were really excited to come out and play them. A great opportunity to play against a potential future Opal (Shyla Heal), some great Waratah players, some great current and former WNBL players.”

“We had a bit of a chat at the end of our shootaround this morning and discussed what we each wanted to get out of the weekend, and the themes were: we don’t know if we’re going to play any more basketball this year, so let’s just take this opportunity and assume that this is going to be the only basketball we play all year and just grab it by both hands and really enjoy it. We also talked about coming out and playing to win. Just because we’re a young group, doesn’t mean that we can’t take it to these teams and really compete.”

Like many people in the stadium, Higgisson was also impressed by the performance of Amelia Raidaveta against the vastly more experienced McSpadden.

“It was great. We’re really lucky that we have Amelia, we’ve poached her from Renae’s Under 20s team, so we’re grateful that she has joined us for this weekend, and it was super-fun to watch.”

On paper, the Storm look to be the team of shooters in this tournament, but the Aces stole a march on their opponents, knocking down shots from outside with aplomb on their way to a 15-point victory. Following a close opening to the game, the Aces blew the game wide open in the second quarter, opening up a 20-point advantage at one stage. From that point, getting back into the game would prove exceedingly difficult for the Storm against an Aces side benefiting from the cohesion gained in their opening win over NSW U20 White. Lauren Nicholson top-scored with 22 points for the Aces, with Cassidy McLean, Jasmine Forcadilla, Courtney West, and Rachel Maenpaa also reaching double digits. Maddy Norris led the way for the Storm with 19, with Alex Delaney adding 17 and Leilani Mitchell contributing 14.

With her side playing their second game of the evening, Aces coach Shelley Bates spoke about the cohesion that had been forged in the earlier game, as well as beating the Storm at their own game with a solid shooting performance.

“They’re starting to bond a little bit which is good, defensively starting to look a bit more solid too which is good. Some testing periods through that, but they held their nerve and got it done in the end.”

“We shot the ball really well, and we’ve got some good shooters. The thing is, I think we’ve got shooters who can do a range of things. So maybe that’s why we weren’t considered that way. Like Loz (Lauren Nicholson), she can shoot, but she can drive, she can pull up. So, it was a good performance from them.”

Meanwhile, Storm coach Gail Henderson was equally as aware that the extra game brought additional familiarity for the Aces, which is something the Storm can take heart from as they head into their second game on Saturday.

“We’ll take out of the performance that the other team shot really well, it was evident that this was their second game and they looked a little bit more cohesive than us. So I think what we can take out of it is that we’re just going to play a little bit better as a team tomorrow, get more familiar with each other, and keep working at it.”

“I think we’ve just got to play our own game (tomorrow), defensively keep those guys in front of us. Don’t let them get anything in transition, then let the offense flow a little bit more. They’re getting used to each other still, and I think our shots will come.”