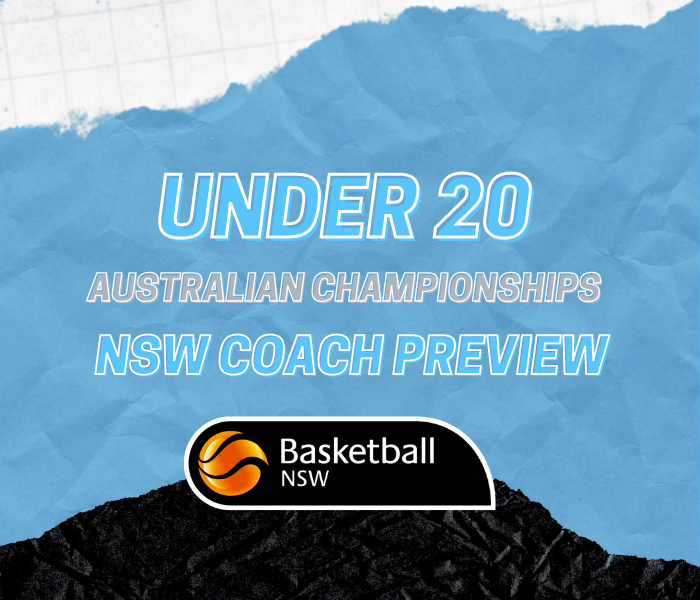 As the Australian Under 20 Championships tip-off this week in Mackay, Queensland, Basketball NSW is excited to bring you a full preview of the Head Coaches and their support staff that will lead their respective teams on court for the tournament.

Returning to the Under 20 Women NSW Blue team as Head Coach for the third year in a row is Tom Garlepp. Garlepp is no stranger to the elite tournament, as he has also been featured in the past as an Assistant Coach to the U20 Men and U16 Women during the past few Nationals. In 2019, the U20 Women collected silver under his guidance and he hopes that this team can make their way to the gold in 2021. He also currently features as the Head Coach in the Spalding Waratah League as the Waratah1 Women’s Head Coach at Norths Bears.

Joining Garlepp is Rachel Higgisson, who is also returning to oversee the NSW U20 Women in her second year as an Assistant Coach. During the season Higgisson also lends her expertise and skill at Norths as an Assistant Coach and is a championship-winning player for the Bears in Spalding Waratah Senior League Waratah1. She will be eager to make her mark in the hopes that her team will be a dominant force within the competition.

Another great inclusion to Garlepp’s support staff is former Championship player with Adelaide Lightning in the Women’s National Basketball League, Lauren King. Hailing from Ballina, King has played over 250 games in the WNBL and has also coached at the Australian Country Junior Basketball Cup in 2020, and she will no doubt add an extra advantage to the team with her wealth of knowledge & Basketball IQ.

To round out the NSW U20 Women Blue team is Newcastle’s Dhana Davidson who will feature as the team’s Manager. Davidson is also no stranger to the Australian Junior Championships in what will be her second stint as the U20 Women’s Manager. She has also been a staple in the Basketball NSW Pathways for many years including a regular contributor to the Australian Country Junior Basketball Cup and Newcastle representative sides.

Another familiar face around the NSW High Performance Pathways suits up as our second U20 NSW White Women’s team Head Coach, Renee Garlepp. The 2020 Waratah Youth League Coach of the Year takes the reigns in what will be her first state team, however she is no rookie when it comes to working with our athletes as she has spent the last three years as the Assistant Coach of the U18 Metro Girls. Garlepp has spent the past few years coaching in the Spalding Waratah Senior League and once again is the Head Coach of their Women’s Youth League team and will be sure to be one of the most promising up and coming coaches in NSW.

A huge inclusion to Garlepps coaching line up is Gosford’s, Will Granger who will play the role of Assistant Coach. Once again, no stranger to working amongst a NSW State Team as this will be his fifth trip to Nationals, previously as the Head Coach of the U16 Country Men in 2016 & 2017 and third as an Assistant Coach. Granger has also been a staple within various High Performance Programs within NSW during the last nine years and has been coaching within numerous junior representative programs at Gosford for the past 12 years. He is also the Head Coach of Central Coast’s Youth League Women and at the Central Coast Academy of Sport. He will bring a plethora of expertise to Garelpp’s team in the aims of a podium finish.

Four-time Defensive Player of the Year in the Spalding Waratah Senior League, Kate Seebohm also joins the U20 NSW White Women as an Assistant Coach. In what will be her first Nationals, the Norths’ native is no stranger to coaching at a high level with previous experience as the Head Coach with various Norths Bears Representative sides and as the Head Coach of the First Girls Basketball team at Redlands. She has also played four seasons at the California University of Pennsylvania and will share her unique awareness perspective on and off the court to her team.

Sydney Uni Flames Championship winning Manager, Natalie Donnelly also joins Garlepp’s trusted support staff. In her first time managing an Under 20 side, she has previously participated in the National tournament as the Team Manager for the Ivor Burge NSW Women’s team in 2013 and as a referee in her youth. She has also been the Team Manager for the Sutherland Sharks Waratah Championship Women’s team for two seasons in 2015 & 2016 and has been the Sydney Uni Flames Manger since 2015 including the 2016/17 season when the Flames won the competition. With over 35 years of experience in basketball as a player, coach, referee and team manager, Donnelly will be the gift that keeps on giving – sharing her passion for the game with the U20 NSW White Women.

Ashley Henrisson takes charge once again of the Under 20 NSW Blue Men in what will be his second spell as Head Coach of the team. A regular staple within NSW coaching ranks, Henrisson will wish to start his seventh Nationals with a bang as he will bring his learnings from when he was previously the assistant coach of the U20 Men & U18 Men to the forefront. Henrisson is also a long time coach with Bankstown, continuing to coach numerous Junior and Senior programs and currently resides as the Head Coach of the U18 Men. There is no doubt that Henrisson will continue to foster a great relationship with his team in the aims of getting them to the next level.

Joining Henrisson’s coaching staff once again as his Assistant Coach is Brook Pearce. Pearce is an established coach within the BNSW High Performance Programs, and continues to coach at his local association at Norths in Junior and Senior competitions. He currently is the Head Coach of the Norths U18 Men and coaches at Trinity Grammar.

Henrisson has also appointed an Apprentice Coach to join his support staff with Glebe’s Miles Bench, heading to his first national championships after coaching various teams with Glebe and at The Shore School. Bench is also undertaking a coaching Internship with the Sydney Kings in the National Basketball League and will offer a fresh perspective for the U20 NSW Blue Men.

In his first Manager role for a Basketball NSW state team, comes Noah Mitchell. Although he has been involved as a Manager with the Sydney Comets U14 Clube National that won Bronze in 2018, Mitchell is a Physiotherapist by trade which will be a valuable asset and skill set for the team.

Back in the saddle for the U20 NSW White Men is Sam Adams. In his second appearance at the U20 Nationals as Head Coach, Adams is the current director of Coaching and High Performance at Queanbeyan Basketball. During the last five years, he has also participated in BNSW State Development Camps and High Performance Programs in which he has been a valuable asset in the development of basketball within the state. Adams will add vital experience to his team and coaching staff, which blends a nice mix of experience and professionalism.

Adams will be joined by the experienced Ben O’Neil as his Assistant Coach of the U20 NSW White Men. O’Neil, a member of the Australian Boomers Coaching Staff at the 2016 Rio Olympics & 2019 FIBA World Cup in China can be relied upon to support Adams on the bench. He has also featured as the Assistant Coach of the U20 Men’s State team since 2015 and was the Head Coach the University of Sydney Men’s and Women University Sport National team in 2016, 2017, & 2018. O’Neil also worked as the Sydney King’s Technical Assistant, under Head Coach Andrew Gaze from 2016 till 2019. As the Assistant Coach, O’Neil can only benefit this team as they look to spring a surprise or two within the highly competitive pool rounds.

Jon Pratt will take the lead as Team Manager of the U20 NSW White Men. Pratt brings a wealth of team management experience across NSW and the ACT to this role and will be his second time as a Team Manager of a U20 Nationals side.

You can catch all our coaches and our teams live during every game thanks to Basketball Australia, Foxtel & Kayo Sports. In partnership with Australia’s leading sports streaming service, Kayo Sports, 19 of the games including the Men’s, Women’s and Ivor Burge Gold Medal Games will be streamed live and free on Kayo Freebies featuring multi-cameras with expert commentary. The remaining 51 games of the 2021 Championships will be streamed live without commentary and accessible via the Basketball Australia YouTube account.