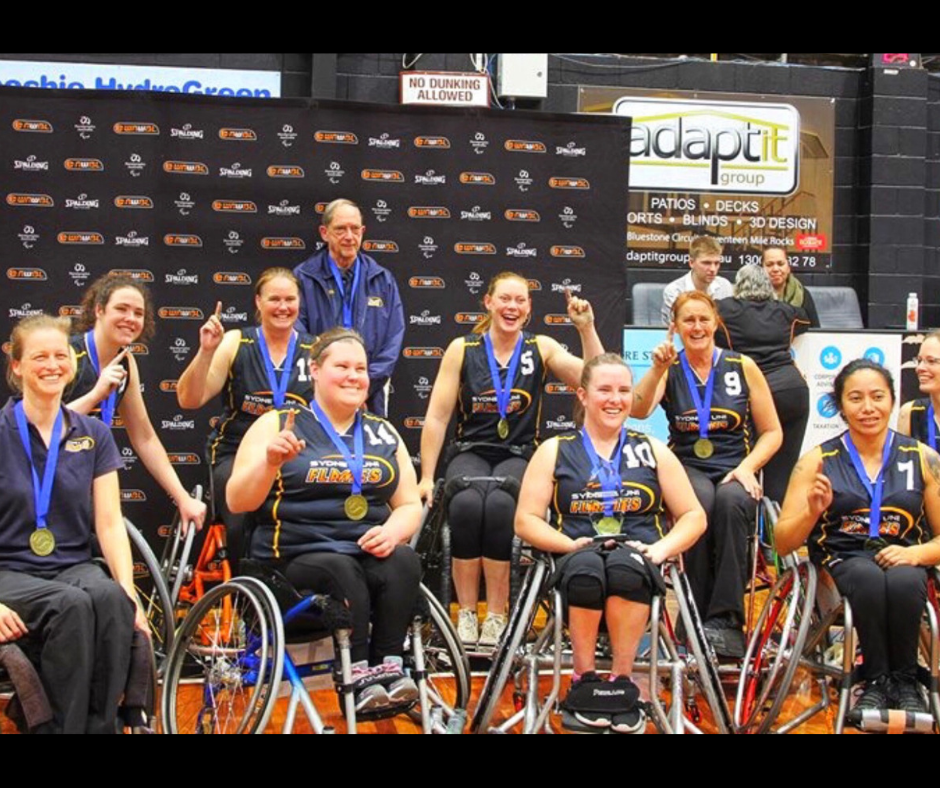 On the weekend the Sydney Uni Flames Wheelchair Basketball Team won the WNWBL Championship! It was a great weekend for WSNSW & BNSW with all of our teams doing exceptionally well. As well as The Flames winning Gold, The Sydney Metro Blues won the Bronze, and in the NWBL the Wollongong Rollerhawks won the Gold.

Special mentions to Annabelle Lindsay who won Most Valuable Player (MVP) of the WNWBL 2019 Finals series, to add to our season award winners Hannah Dodd, who won the one-pointer MVP of the WNWBL 2019 season and was also named in the All-Star Five of the WNWBL 2019 season; and congrats to our brilliant Head Coach, Alan Cox, who was also awarded the WNWBL 2019 Coach of the Year. Hannah also went on to win gold with her NWBL team, the Wollongong Rollerhawks, in the NWBL Championship game immediately following us (we had a combined finals series for WNWBL & NWBL at the same venue).

We also got a great write up in The Chronicles of SUSF (Sydney Uni Sport and Fitness), and Annabelle Lindsay was voted the SUSF MVP of the week.

In a tough season of injuries and illness, the Flames team played well for each other every round, and we finished the season round games in second place behind the Perth Wheelcats, earning us a top 2 play off and second chance opportunity at finals.

In the finals series of the WNWBL on the weekend, we first played Perth Friday night and in a close tussle, just lost 56-52. It was a close game 28 all at half time, 42 all at 3/4 time, and Perth just pulled away from us with 2 extra baskets in the last quarter.

Annabelle Lindsay led all scorers in the game with a double-double of 30 points, 14 rebounds and 6 assists, Brodie Palmer had 14 points, Hannah Dodd had 12 points and 5 assists, Stephanie van Leeuwen had 6 points, 5 rebounds, and 4 assists, Tracey Carruthers had 2 points, and Liesl Tesch had 2 points, 9 rebounds and 8 assists.

That win saw us go into the Gold medal game with a re-match against the Perth Wheelcats. We won the Gold Medal game Sunday of Women’s National Wheelchair Basketball League 2019 finals v Perth Wheelcats 55-50 – yay!

It was a great team effort on and off the bench, including some clutch free-throws from Annabelle Lindsay to secure the win in the last seconds of the game. Annabelle Lindsay top-scored for us in the game with a double-double of 25 points & 14 rebounds, Hannah Dodd had 12 points and 4 rebounds, Stephanie van Leeuwen had 6 points & 4 rebounds, Brodie Palmer had 2 points, Tracey Carruthers had 2 points, and Liesl Tesch had 8 points, 5 rebounds and 11 assists.

Thank you so much for all of your support during the season, now it is on to more training and local and national competitions to develop the team and players leading into the Paralympic year next year.