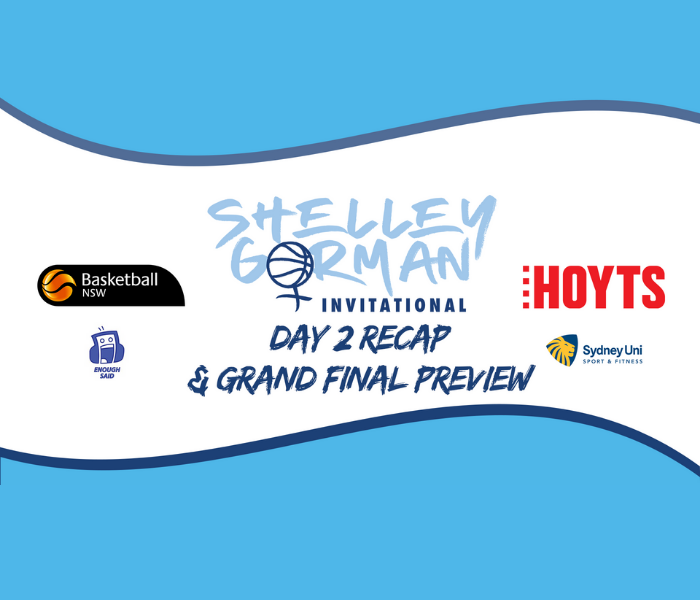 Day 2 of the Shelley Gorman Invitational saw Sunday’s grand final teams decided after an electric day of basketball. The Aces will take on the Storm in a pool stage replay after knocking off the Mystics and Fever respectively in the semi-finals, with the Aces storming home from an early deficit to secure their position. The grand final will be streamed live on our Basketball NSW’s YouTube channel from noon AEDT.

A Storm side that clearly benefited from the cohesion generated during Friday night’s loss to the Aces bounced back with a dominant 40-point victory over NSW U20 White. No doubt stinging from the previous evening’s defeat, the Storm opened up a handy lead before dominating in the second half, leading 58-28 after three quarters before closing things out in the final term. A giant 30-point performance from Maddy Norris led the way for the Storm, with Emily Simons, Alex Delaney, and Sarah Schicher also reaching double figures. Ella Dent led the NSW U20 White side with 11 points, with Bronte Corke chipping in 9

NSW U20 Blue put in a much-improved performance on the back of a stellar effort from Kitty Henderson, but it was the Mystics who secured victory in their first game of the competition. NSW U20 Blue proved hard to shake throughout the contest, but some patches of inconsistency burned Rachel Higgisson’s young charges, who allowed the likes of Alison Schwagmeyer slightly too much leeway at times, culminating in a 15-point victory for the Mystics. Schwagmeyer would finish the game with 17 points, whilst Shanae Greaves dominated the interior to tally 13 points for the Mystics. Henderson led NSW U20 Blue with 13 points, with Georgia Genner and Kate Kingham each adding 8 on the back of some knockdown outside shooting.

Both teams came into this game with one win under their belt against NSW U20 Blue, meaning the winner would take top spot in the pool and, theoretically, an easier semi-final matchup. It was a pair of WNBL stars, one current and one past, that took over for the Fever as Shyla Heal and Renae Garlepp put in a pair of outstanding performances with Garlepp in particular reminding those in attendance of her days as a star for several WNBL clubs. The Mystics weren’t without their patches of good play, but with the Fever defence playing Alison Schwagmeyer well and limiting her to just five points, their offensive firepower was limited as Heal and Garlepp dominate backcourt proceedings in the 16-point victory. Heal led the Fever with 15 points, with Garlepp chipping in 13 and Lara McSpadden adding 10. Sherrie Calleia top-scored for the Mystics with an even 10 points, whilst Abi Curtin contributed 8.

An incredibly close game between the Storm and Fever was broken open late in the third quarter by the Storm, who put together an impressive run to put some separation between the two teams after Emily Simons and Lara McSpadden dominated the early proceedings. The teams were rarely separated by more than a couple of points for the first half and well into the second half, but once two-time WNBL Grand Final MVP Leilani Mitchell decided to flick the switch, life became far harder for the Storm as the Southside Flyers star backed up Simons’ early efforts. Inspired work at both ends saw a tight margin quickly become double-digits, and soon enough the Storm had secured their spot in the Grand Final as Alex Delaney earned a trip to the line before duly converting to hit the Elam Ending target score. Mitchell finished with 22 points and Simons with 17, whilst Alex Delaney and Maddy Norris added 13 apiece. Fever star McSpadden tallied 24 for the game-high, with Shyla Heal adding 14 and Shakera Reilly contributing 11.

Alison Schwagmeyer posted an incredible 21 points in the opening quarter as the Mystics jumped out to a double-digit advantage during the first half, with the Sydney Uni Flames star combining with Abi Curtin for 39 of the Mystics 41 first-half points. However, the Aces recognised that although the margin was significant, it was not insurmountable as they went about gradually chipping away at the deficit. The margin hovered around the ten-point mark for a lengthy period, but the fourth quarter saw the Aces come right over the top, eventually opening up a two-possession lead as the Elam Ending was implemented with three minutes to play. The Mystics hit back from a 57-51 deficit to put a scare through the Aces, but the leadership of Mikaela Dombkins and Lauren Nicholson helped the Aces over the line, with the Townsville Fire star knocking down a pair of free throws to secure victory. Nicholson’s 18 points led the Aces, with Dombkins, Courtney West, and Jasmine Forcadilla all reaching double figures. Alison Schwagmeyer led all scorers with 31 points for the Mystics, with 14 points from Abi Curtin providing outstanding support, but once the scoring dried up, it proved incredibly difficult for the Mystics to get much going at the offensive end as the game progressed.

In a repeat of Friday’s nightcap, the Aces face the Storm with the latter looking to get revenge for their opening night loss. Both teams have improved their cohesion monumentally since their first game, with the Storm in particular looking far better than when they faced an Aces team with a game under their belt in their opener. The Aces will be battle-hardened after grinding out a win over the Mystics after facing an early deficit, but the Storm will be buoyed by the way they broke open what had been a tight contest in their own semi-final win over the Fever.

Although the teams have played each other once already, Storm coach Gail Henderson is of the opinion that little can be read into that game given it was her side’s first contest.

“I don’t think we need to worry about that game, to be honest,” Henderson remarked. “That was our first game, and we hadn’t played together before so I would just disregard that game in a way, and just keep building on our last game, which we played today.

Leilani Mitchell was one player who led the Storm to their semi-final victory, and Henderson will be looking for the WNBA star to reprise that role on Sunday, with support from a number of players with big-game experience.

“It’s money time, and (Leilani) is a great leader. She just knows when to speed the game up, when to slow it down, where to get her shots. So, kind of put it in her hands, and she came through (on Saturday). She’s a superstar.”

“Any time you can use that sort of experience, it’s all about decision making and being in the right positions at the right time. Good leadership, good talk, and being able to calm people down when they are getting a bit lost, or make corrections and keep talking to each other and build as a team.

“And I think that’s what’s happened this whole tournament, the girls have just been so wonderful, all the players are just really great teammates, and I’m sure that that will help us tomorrow.”

Aces coach Shelley Bates now has a team that is truly battle-tested after their comeback win, but is aware that tomorrow is a new day with a new opponent, even if it is one they have already beaten once in this tournament.

“The Storm are a tough unit, and like all the teams they’re improving with each game they play, and they’ve obviously got two crafty coaches in Hendo and Michelle (Austin), so they’ll be plotting away tonight.”

Bates took in the first semi-final prior to coaching the Aces in the later game, and already has a couple of ideas for how to ensure they pick up a second win over the Storm in as many outings, with her own team’s experience and leadership a key.

“It’s experience, the last play (to win the semi-final), that’s Mikaela recognising that Lauren had a mismatch and just telling her to post up and get inside, and that’s experience. You can’t buy that, it’s so valuable, we’ve got a nice blend of youth and experience, and so far, so good!”

With both teams featuring well-balanced lineups stacked with star talent, expect a pair of sides that have quickly turned into well-oiled machines deliver a classic in the Grand Final. The game will be streamed live on Basketball NSW’s YouTube channel from noon AEDT.