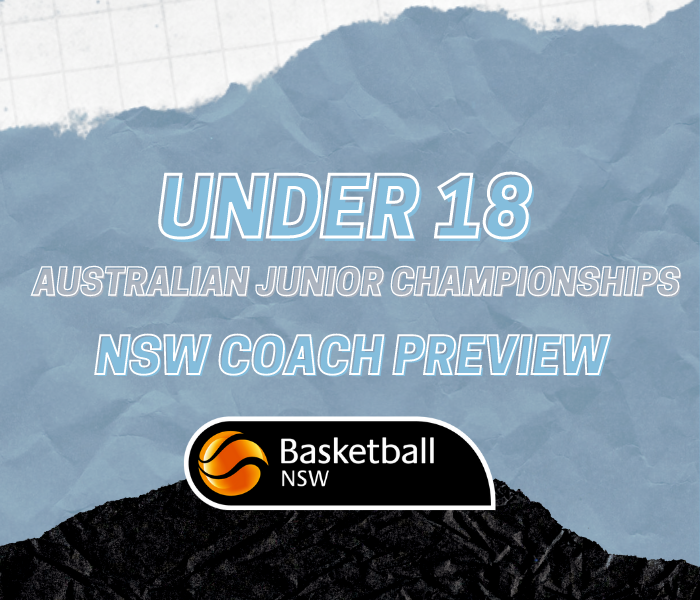 As the Australian Under 18 Junior Championships tip-off this week in Werribee, Victoria, Basketball NSW looks at the Head Coaches and their support staff that will lead their respective teams on court for a full preview and history.

Back in the saddle as Head Coach for the U18 Country Men in 2021 is Basketball NSW High Performance Coach, Curtis Sardi. Sardi was due to be back on court as Coach for the U16 Country Men in 2020 but after the cancellation, Sardi is ready to sink his teeth into a Country side that is set for a comeback. He has been at the helm as a Head Coach before, coaching the NSW Metro U16 Men for three years, Assistant Coach to the U20 Women and U18 Metro Men.

Sardi will be joined by two influential Assistant Coaches in Maitland’s Cal Wade & Newcastle’s Darren Duff. In his fifth time at an Australian Junior Championships for Assisting both U18 & U16 Country Men over the years, Wade will no doubt light a spark within the side and use his experience from being in the BNSW High Performance Programs as a State Performance Program Coach and Development Tour Coach to the forefront. Duff is also no stranger to the BNSW High Performance Program as he has been a staple in the list of coaches for several years and has been coaching numerous junior and senior teams at Newcastle for the past 11 years. He will be undertaking his first Junior Championships but will not be hesitant in sharing his plethora of expertise with the team.

Sardi has also added one final key to his team’s puzzle for this year, with the inclusion of John Hargreaves as his side’s Manager. Hargreaves, a two-time gold medal winning coach will be sitting at the other end of the bench this time round in a very different role as the U18 Country Boys Manager. He will undoubtedly bring his wealth of knowledge to the group and share his experiences with the boys from his time at BNSW and with Illawarra Basketball from the past 20 years.

Reece Potter takes charge of his first NSW state team after making the transition back to the Sky Blue from Victoria and will oversee the NSW U18 Metro Men. Originally from Maitland, Potter has been heavily involved in the BNSW pathway and has previously been involved with NSW Country state teams in the past before making the move around Australia for other coaching roles.  Potter is now the current Head Coach at Knox Grammar and the Hills Hornets Waratah 1 Men and has a long list of coaching history attributed to his name. Potter is set to make his return to the Australian Junior Championships as he has previously Head Coached the Victoria Metro U18 Women for the past three years while working in Melbourne as the Coaching Director for Wyndham Basketball. He is also a former Big V, SEABL Head Coach and has been an Assistant Coach in the WNBL and at three Oceania championships for Australian Junior teams.

Another great inclusion to Potter’s support staff is Sydney Comets’ Will Hill, who has been the Head Coach for their Youth League, Under 18 and Under 16 sides for the past eight years. Hill, a former Division 3 College Player, will be attending his third nationals and will be eager to set the pace of the Metro Men early in the competition.

Angus Bourke will also join the bench as an Assistant Coach in what will be his third Australian Junior Championships for NSW after previously working as the Assistant Coach to the NSW U20 Women & U18 Metro Men. Bourke who has been a staple at Norths Bears for the past seven years as a representative coach has also been a frequent coach at our Basketball NSW High Performance Programs, especially as a State Performance Coach for the past few years.

In her first Manager role for a Basketball NSW state team, comes Kristy Dallinger. Although she has been involved as a parent for over seven years and has managed various Norths Bears. representative sides, she has over 20+ years of managing history for various Netball programs before changing to Basketball.

For the Under 18 Country Women, Illawarra’s Shelley Bates will take charge of the side. Bates was appointed as Head Coach of the side for the 2020 tournament but due to the cancellation, she is ready to continue on the journey for gold and was previously an Assistant in the Under 16’s event. After attending numerous Australian Junior Country Basketball Cups and various BNSW High Performance Programs, Bates continues to coach at her local association at Illawarra in Junior and Senior competitions.

Joining the all female coaching staff is Christine Higgisson and she also has attended the Australian Junior Championships numerous times over the years in a number of roles and age groups. A former coach and player herself in the WNBL and Waratah League, Christine will continue to foster a great relationship with her team in the aims of getting them to the next level.

To add to the stacked coaching line up, the ever experienced Bec Dudic will also lend a hand as Assistant Coach. Dudic is the current Player & Coach Development Manager at Illawarra Basketball. From her junior days playing with the Illawarra Hawks, she travelled to the USA for College Basketball before landing a role at Basketball Queensland, and at the Centre of Excellence.

Bates has also appointed a Development Coach to join her support staff with Queanbeyan’s Lauren Brahe heading to her first national championships after coaching various junior and senior teams for many years.

And to round it all out, Renelle Genner, (affectionately known as ‘Mamma G’)  will feature as Manager for the U18 Country Women. Though this may be her first time managing a side at the Australian Junior Championships, she has fostered many teams in her time ranging from the Waratah 1 Women’s team at Illawarra and a handful of representative sides including from the Australian Country Junior Basketball Cup.

For our Under 18 Metro Women, another familiar face picks up her coaching board for a shot at the title, with Lauryn Curtin appointed as Head Coach. Familiar with her side, she has Head Coached at two previous nationals in 2018 & 2019, with the Under 16 Women learning from her large array of knowledge of the game that will transition well into this U18 team. Curtin is currently also the Head Coach of the Sydney Comets Youth League Women and is actively involved with Combined High School Basketball and NSW All Schools Basketball.

Next to suit up is Basketball NSW High Performance Coach, Will Lopez. The Bankstown native and Head Coach of the U16 Metro Men for the past few years, Lopez joins the staff as an Assistant Coach and will help aid in creating a team dynamic that will rival other states using his unique awareness of the game at a high level and passion for teaching.

Alissa McCann will manage the girls team once again. McCann or affectionately known as ‘Mamma Liss’ is no stranger to working in a fast paced environment as working as a Paramedic and has been the team Manager for NSW Metro Women since 2012. She has also worked with Curtin previously and knows how to keep players motivated and together.

You can catch all our coaches and our teams live during every game thanks to Basketball Australia, Foxtel & Kayo Sports. Partnering with Kayo Sports, 26 of the games played (including the finals) will be streamed live and free on Kayo Freebies with the remaining games streamed live without commentary on Basketball Australia’s YouTube account. Stream the Australian Under-18 Championships for free on Kayo Freebies. No credit card required, register now!

For the highlights from the City v Country match CLICK HERE.