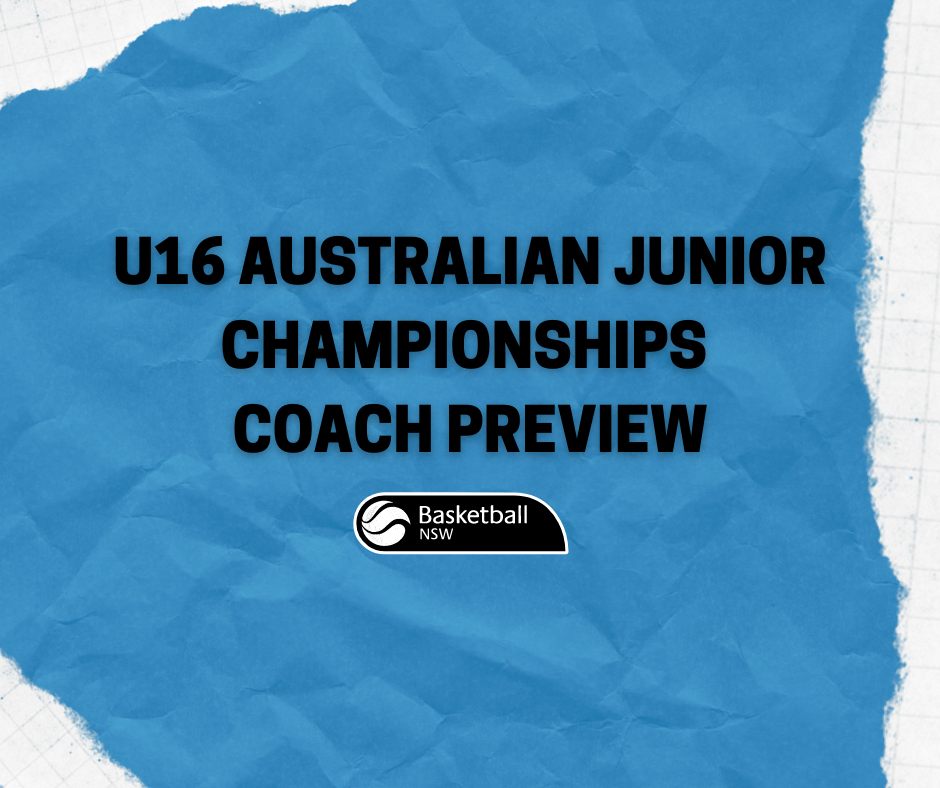 As the Under 16 Australian Junior Championships tip-off this week in Perth, Western Australia from the 3rd-10th of July, Basketball NSW looks at the Head Coaches and their support staff that will lead their respective teams on court for a full preview and history.

In his first Head Coach role, Illawarra’s Tom Farrar will finally be able to take his team to an Australian Junior Championships with the past two years halted due to the pandemic. He was set to oversee last year’s group but as NSW was unable to attend, he will have to wait till the start of 2022 tournament to get his kids on the court and in the running for the gold. This will be his fifth time attending the tournament, previously as an AC after spending the past seven years within the BNSW High Performance Program. He also has overseen Illawarra’s State Performance Program for a number of years. Farrar will certainly be one to watch and will be ecstatic to finally land in Perth ready to take on the best teams in Australia.

With his coaching staff he is in very capable hands with Byron’s Alvin Caoyonan & Coffs Harbour’s Andrew Williams. This will be Caoyonan’s first National Championships after being on Farrar’s staff last year when they were unable to compete. He has also been extensively involved in NSW High Performance programs for over five years and a significant contributor to Country NSW & Far North Coast basketball community through Byron Bay Association and the North Coast Academy of Sport. Farrar’s second assistant coach Williams will also be attending his first AJC’s. Williams is currently Coffs Harbour’s State Performance Program Coach as well as being a long time junior and senior Sun’s representative coach.

Last but not least on the sidelines is Manager Andrew Farrar who has a long list of accolades next to his name in the manager role for numerous sports including managing the 2022 Samoan Rugby League National side and previously the NSW Blues. A former league player himself, Farrar will certainly be an asset to everyone involved with his elite sporting knowledge and personality during the week long tournament.

Leading the U16 Country Women is former NSW Country representative & Australian Institute of Sport assistant coach, Kristy Flores. Flores who aligns herself with the Maitland Mustangs joins the team after a long list of basketball accomplishments playing and coaching. Flores was an Assistant Coach at the Australian Institute of Sport Women’s basketball program from 2009 till 2013 after a well established coaching career in America at numerous State Universities. In 2010 she was awarded the National Junior Coach of the Year from Basketball Australia and was a former WNBL player during the 1990’s. She will look to inspire her young team and instill to them that basketball and sport can be a pathway to friendship and achieving great things.

Partnering as Assistant Coaches in the all female line up are first timers, Lesa Mathews from West Wyalong and Maddison Delaney from the Illawarra Hawks. Matthews has been coaching at West Wyalong for the past 25 years for numerous teams at her local association and joined as a BNSW network coach in 2019. She has been on hand at many BNSW Country events such as Under 12 Jamboree and the Australian Country Junior Basketball Cup as well as coaching junior teams at the Southern Sports Academy since 2020. Delaney, a local Illawarra junior & now senior representative will also be on hand to assist the girls during their time away. Another BNSW network coach, she has also attended numerous basketball staples for Country including the Talented Athlete Program and State Performance Program Camps, D-League and the Australian Country Junior Basketball Cup.

The glue that holds the team together is Manager Nicole McMahon from Port Macquarie. McMahon is no stranger to the manager role with this being her fourth time attending a nationals event and has orchestrated many other country teams from the Under 12 Jamboree to BNSW High Performance Camps. She will certainly be the stable figure for the team and coaching staff and has plenty of experience in supporting and motivating each member to be the best that they can.

For the U16 Metro Men, current Norths Bears coach Angus Bourke has been appointed as Head Coach for the team. This will be his first time as HC but is no stranger to the tests and torments of the week as he has had past experience at the national level as an assistant for a number of years, even helping the team walk away with a silver medal back in 2019. Bourke has worked closely with BNSW since 2016 as part of the High Performance Program attending many sanctioned events and programs.

In the assistant coach roles are Blake MacFarlane from the Penrith Panthers and Brook Pearce also from the North Bears. MacFarlane is a long term BNSW High Performance Coach and has used his experience to enrich the program at a junior level for Metro NSW. This will be his first time attending the Australian Junior Championships but will be a true asset to the team with his unique perspective and basketball IQ. Pearce will also be invaluable to the team as assistant coach coming off as an assistant for the Under 20 Men back in 2021. He is an established coach within the BNSW High Performance Programs, and continues to coach at his local association at Norths in Junior and Senior competitions with their Youth League Program as well as Norths Director of Coaching.

Last but not least, long time basketball administrator Chris McKibbins will be the U16 Metro Men Manager for 2022. He has plenty of experience leading his respective squads to championships and has led Macquarie University to multiple University games/nationals in recent history. The boys will look to McKibbins for that extra push of motivation throughout their week away fighting for the gold.

Another familiar face in the Basketball NSW coaches ranks is Manly’s Tim Hill. Hill has been a leading force at the Sea Eagles coaching various representative sides for the past 13 years and has been with BNSW as a network coach for the past six years. This will be his fifth time heading to the AJC’s as coach, winning bronze in 2018 and silver in 2016.

Former Norths Bears representative coach, Lara Scholz and current Norths Under 16 Girls Junior Premier League and Basketball High Performance Coach Macs Monk take the reins as Hill’s two assistant coaches. For Scholz this will be her second time heading to the Australian Junior Championships after having the privilege to tour with the NSW U16 Metro

Women’s team in 2019. Scholz has also been coaching in various BNSW programs for five years, and has 10 years experience coaching juniors at the representative level. Monk steps into the role as second AC for the U16 Metro Girls in his first tenure at Nationals. He has over 10 years experience as a representative coach and recently was the Northern Suburbs Basketball Associations’s Development Officer. Monk now works for Basketball NSW as a High Performance Coach and will be a valuable resource for his team.

Rebecca Palmer will serve as Manager for the U16 Metro Girls. Hailing from the Penrith Panthers, this will be her first time at the National event after coaching and managing representative teams at Penrith during the past nine years. She is also involved within the BNSW officiating space as both a technical official and referee and involved with Sydney West PSSA as the girls convenor since 2016. Palmer looks forward to cheering on the girls from the side line and encouraging them to play their part within the team.

You can catch all our coaches and our teams live during every game thanks to Basketball Australia, Foxtel & Kayo Sports. Partnering with Kayo Sports, a selection of games will be streamed live and free on Kayo Freebies (including the finals) with the remaining games streamed live on Basketball Australia’s YouTube account. Stream the Australian Under-16 Australian Junior Championships for free on Kayo Freebies. No credit card required, register now!